Fly fishing is something that I have experienced with a guide once before however, for a long time I’ve had this urge to give a try on my own.  A little while back  I started researching and learning about fly fishing and the gear required to get started.  I will have to admit that I was overwhelmed in the beginning.  The whole thing was a blur at first.  I mean, there is so much information out there, podcasts, articles, youtube video, and on and on.  To be honest this isn’t the first time I’ve researched this topic. The first time was around 3 years ago and I just got so overrun mentally that I gave up.

This time I was determined to wet a fly…one way or another.  I decided to keep it simple, take a basic set of recommendations and go for it! I headed down to Bass Pro and started looking at gear…and once again data overload!  Luckily the gentleman in the fly shop had seen my type before.  After an hour or so of discussion and some much needed guidance I had a basic 5 weight rod and reel combo, waders, boots, flies and a few other necessary items. No doubt in my mind that with out Joe’s guidance I would probably still be wandering around looking lost!

The next decision was where to go.  I decided to make the two hour drive east to the Lower Illinois River.  This is a stocked trout stream fed by the tailwater from Lake Tenkiller that is regularly stocked with Rainbow and Brown trout by the state of Oklahoma. The Watts unit has a trophy fish area that is catch and release.   this are is a bit of a walk but it was worth it in the end. After getting all my gear organized walking downstream about mile I was finally going to do it!  It was a very cold day and there were only a few other fishermen on the stream but for some reason I was as nervous as could be.  I think it was the anticipation of the challenge.  A basic fly cast seems easy enough when you see it in a video tutorial but let me tell you…its not as easy as it looks. It took me about an hour to get to a point that I was being remotely effective.

I fished my way down the stream until I found myself at a small pool with some large rocks just below the surface.  It was at this moment that I realized how much of a sight fishing game this is.  I could see fish suspended around these rocks and I was determined to hook into one of these fantastic, beautiful fish.  I was using a hares ear fly with an indicator (bobber) about a foot above the fly. 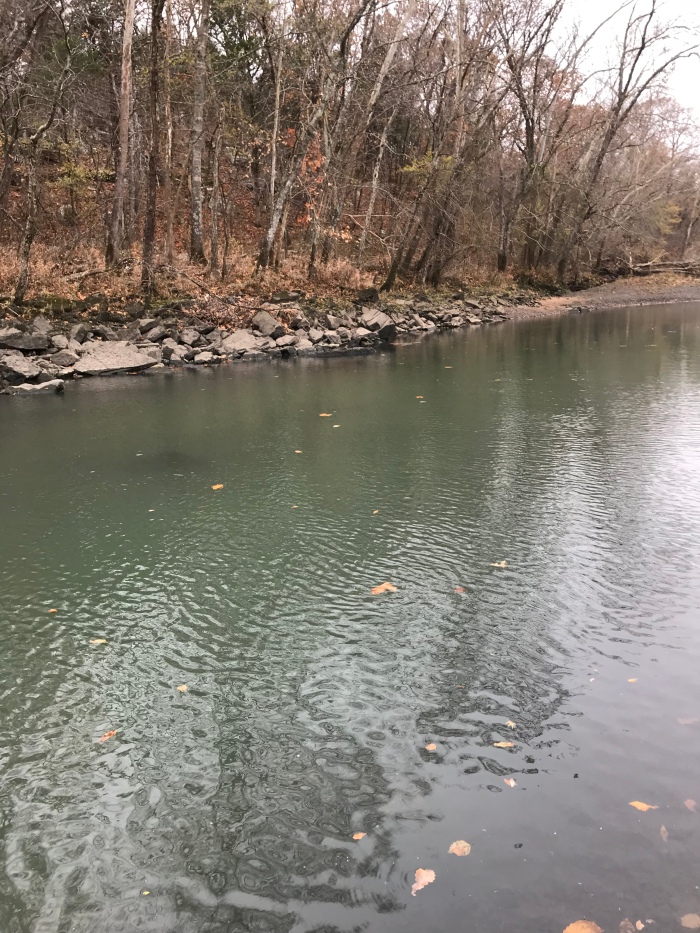 I moved a little too fast down the river bank at first and spooked the first group of fish….oops! I eased on down the pool very slowly until I was just upstream of some submerged rocks.  After a couple of casts I finally had my fly in position to drift right over those rocks.  About the time my fly drifted on the downstream side of the rocks….BINGO!!  I was finally hooked up! My first trout wasn’t a large fish at all but I caught it on my own!!  I haven’t had a moment like that in a long time.  To say I was thankful to God for creating all this for me to enjoy was a major understatement.  I fished for another couple hours and hooked up on about 10 fish in that little pool and only landed a few…which I consider a major victory!

The biggest lesson I learned is to keep it simple.  Even as complex as fly fishing seems like it can be, it really wasn’t that difficult once I got my brain to settle down and got a little help. Next, you don’t need nearly as much gear as you think to get started.  I think I had 5 different flies in my little box that Joe had recommended for the LIR…and they worked! That said,  I did have some spares of each version which was good because I did snap off a couple flies with improper casting.

Overall my first solo fly fishing experience was a success and I cant wait to go again.  Hopefully this encourages you to step out of your comfort zone and go try that something you’ve been wanting to try but just never have…